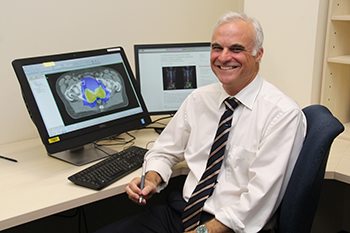 An evaluation of treating breast cancer with a combination of surgery and post-operative radiation therapy has found significantly improved long-term outcomes and substantially reduced side effects of treatment.

“Breast cancer can be cured with a combination of surgery and post-operative radiation therapy,” Assoc Prof Shakespeare said.

So successful are the techniques that a team led by local cancer experts has published an Australian-first evaluation of the curative approach in the Royal Australian and New Zealand College of Radiologists’ Journal of Medical Imaging and Radiation Oncology.

Each year, around 260 women are diagnosed with breast cancer in Northern NSW and 190 on the Mid North Coast, according to Cancer Institute NSW figures. The treatment techniques evaluated include hypofractionation (treating in fewer sessions), intensity modulated radiation therapy (highly targeted) and treating women in the prone (face down) position.

The evaluation followed 155 patients from the Port Macquarie, Coffs Harbour and Lismore areas who were treated using this technique. The Northern NSW LHD invested $25.3 million in Cancer Services across the region in 2019-20.

“These new techniques are able to substantially reduce the side-effects of treatment, in particular, prone breast positioning is beneficial as radiation is distributed evenly and accurately, limiting exposure to the rest of the body,” Assoc Prof Shakespeare said (photo left).

“The combination of these three techniques has been in use at the MNCCI and NCCI since 2012, and we were one of the first centres in Australia to adopt this method.”

“We report on outcomes five years after radiation therapy. In our evaluation no patient had a cancer recurrence in the treated breast. We also found that no patient had significant side effects, and all evaluated patients rated their cosmetic outcome as good or excellent.”