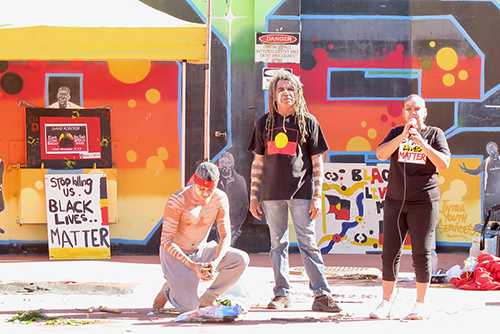 Photos of the Black Lives Matter rally in Lismore were taken by our editor, Robin Osborne.

On Saturday 4 July crowds estimated at up to 5000 in Byron Bay and more than 1000 in Lismore gathered for Black Lives Matter rallies in solidarity with African-Americans experiencing police brutality and Aboriginal deaths in custody in Australia.

Although the local federal MP Kevin Hogan (Nats, Page) described the Lismore rally as “not okay” because of COVID-19 risks, protest organisers insisted the time was right to shine a spotlight on the “ongoing systemic racism” in this country. Rally volunteers moved through the crowd to offer hand sanitiser and masks to anyone who came without them.

In Lismore Widjabul woman Cindy Roberts encouraged attendees to form a circle of unity and solidarity, and a number of local Police joined in. Protester Maddy-Rose Braddon said, “The police were invited to join too and they did. We all got on one knee with our fists in the air to demonstrate our solidarity with the black lives matter movement to end racist violence and deaths”.

Many placards featured the words “I can’t breathe”, as expressed by George Floyd Jr who was killed by a Minneapolis police officer in May. Other signs mourned the 2015 death of David Dungay who used the same words whilst being held down by Long Bay prison guards.

Mr Hogan said that while he believed "Black lives do matter" he felt the health risks outweighed the need to demonstrate. However, no positive tests for the COVID-19 virus have been linked with the rally, nor, as far as is known, with any of the other Black Lives Matter protests held around Australia on the same day.