Book Review - 'See What You Made Me Do' 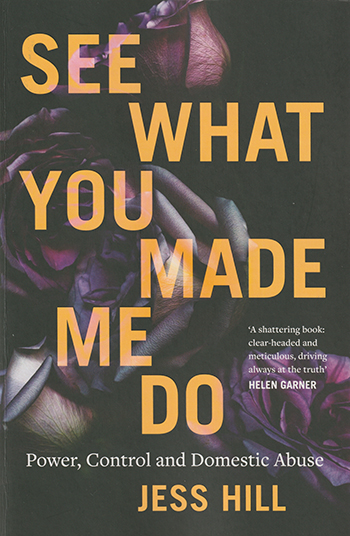 See What You Made Me Do

With apologies for the crudeness, one comes to this book, sub-titled ‘Power, Control and Domestic Abuse’, as if picking up a plastic bag of dog turds discarded by an irresponsible walker. Take a deep breath, fasten your seat belt, this will be an uncomfortable ride.

The subject matter is so unpleasant and the case histories so harrowing that the reader is likely to recoil with a mix of horror and disbelief: how can people treat others, mostly women and in all likelihood partners, so dreadfully; how can so much of society, not least family members, turn a blind eye; and how can authorities be so unsupportive of those suffering the injustices of this all-too-common abuse?

That said, extracts from police logs of domestic violence call-outs show the magnitude and intensity of the problem, and the challenges of officers to face some dire circumstances, while concerned relatives often feel powerless to intervene.

In seeking to answer these challenging questions Jess Hill has delivered a highly intelligent book that was four years in the research and writing, and which won this year’s Stella Prize for women’s literature. Widely acclaimed, and with considerable publicity, it has helped focus the spotlight on the ghastly yet hidden crimes occurring in households throughout Australia.

Despite this, the rates of domestic abuse have risen during the COVID-19 lockdown, with partners (and children, plus household pets) reporting greater suffering because of enforced proximity to their abusers, many of whom have become less employed and as a result even more frustrated and aggressive.

In her first chapter, The Perpetrator’s Handbook, Hill compares the compliant behaviour of domestic abuse victims with American POWs in North Korean camps during the Korean war, writing, “Speak to anyone who’s worked with survivors or perpetrators and they’ll tell you the same thing: domestic abuse almost always follows the same script. It’s a truly confounding phenomenon: how it is that men from vastly different cultures know to use the same basic techniques of oppression?”

Some commentators – you know who you are, Pauline Hanson, Bettina Arndt, Andrew Bolt et al – have sought to position this book within the context of radical feminism, unfair targeting of men, and so on, but the facts speak for themselves… “It… is… inarguable… when people kill their intimate partners, they are almost always killing a perpetrator… There is nothing comparable about male and female victims of domestic homicide in heterosexual relationships. When women commit intimate partner homicide against men, they almost always do it after suffering years of abuse.

“In the vast majority of cases, women kill because they can think of no other way to be safe.”

How do women rationalise their abuse? One study found there are six ways, and the titles are self-explanatory: ‘I can fix him’, ‘It’s not really him’,  ‘It’s easier to try to forget’,  ‘It’s partly my fault’, ‘There’s nowhere to go’, and ‘Until death do us part’.

Hill says some women can spend their entire lives rationalising the abuse they suffer, adding that they may distract themselves from their “unbearable reality” through substance misuse, eating disorders, gambling and so on…”Cruelly, this will likely render them untrustworthy to friends, family and the courts if they do try to leave.”

It is challenging to do justice to a complex book about a very difficult - although stripped down, a remarkably simple - subject: control over, and the abuse of, other people, not least partners. Such behaviour is totally unacceptable - What part of NO! don’t you understand?

As Jess Hill writes, “For those who don’t believe it’s possible to reduce domestic abuse now, consider this: five years ago, few could have imagined something like #MeToo: a revolution not just against sexual harassment, but against patriarchy itself… Revolutions are impossible, until they are inevitable.”

This discomfiting study will be embraced by those inclined to accept its analysis but, unfortunately, may miss the mark with those yet to come to grips with their behaviour.