Book Review - The Emperor of All Maladies 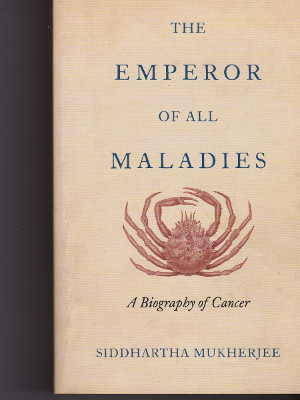 Book Review - The Emperor of All Maladies by Siddhartha Mukherjee. published by 4th Estate

In his 2011 ‘biography of cancer’, widely acclaimed as essential reading for clinicians, cancer patients and supporters, Siddhartha Mukherjee discusses a group of British surgeons, who, in 1933, considered carcinoma of the stomach in terms of an old Arabian proverb, “He is no physician who has not slain many patients…”

As Dr Mukherjee adds, to arrive at that kind of logic is to invert the Hippocratic Oath, but it is hardly the language we hear these days from medical practitioners.

Although a cancer diagnosis, especially an early one, is no longer a death sentence that may justify experimentation, the incidence of cancer continues to rise in certain nations, including Australia, creeping inexorably, as the author puts it, from one-in-four to one-in-three, and now to one-in-two.

Recalling a patient’s description of her condition, Dr Mukherjee, an oncologist and haematologist, and assistant professor at Columbia University, agrees that cancer is becoming “the new normal …an inevitability,” adding that the question should not be if we will encounter this immortal illness in our lives, but when.

The 570-page work has since won a Pulitzer Prize for non-fiction, being named as one of the 100 most influential books written in English since 1923 by Time magazine.

Addressing one of modern medicine’s most complex challenges, he writes, “That this seemingly simple mechanism – cell growth without barriers – can lie at the heart of this grotesque and multifaceted illness is a testament to the unfathomable power of cell growth…. Cancer cells are more perfect versions of ourselves.”

Dr Mukherjee continues, “The secret to battling cancer… is to find means to prevent… mutations from occurring in susceptible cells, or to find means to eliminate the mutated cells from compromising normal growth. The conciseness of that statement belies the enormity of the task.

“Malignant growth and normal growth are so genetically intertwined that unbraiding the two might be one of the most significant scientific challenges faced by our species.”

The journey begins from early records such as the description on a 17th century BC Egyptian papyrus of “bulging tumours on the breast”, and extends to the present day. It encompasses public health research on cancer, notably the work of Doll and Hill on the smoking connection, the efforts to prise more funding from government coffers and private purses, the decades of lab work, and the vast treatment continuum, from surgery, in both its ‘radical’ and less invasive forms, through to radiation and chemical therapies.

Woven through this complex narrative are Dr Mukherjee’s experiences with many of his own patients. These interactions, often immensely painful to him, make it clear that he is not just a clinician, or researcher/writer, who observes the terrain from afar.

Like the book itself, cancer, in the words of oncologist Harold Burstein, “resides at the interface between society and science… forcing us to confront our customs, rituals, and behaviours.”

Meanwhile, researchers and practitioners around the world are striving to find ways of toppling this ‘emperor of all maladies’ from its throne.

No doubt one of the answers, perhaps the main one, in encapsulated in part four (of six) in the book, Prevention is the Cure, beginning with an apt quote from the Chicago Tribune in 1975: “ The idea of preventive medicine is faintly un-American. It means, first, recognising that the enemy is us.”

Of course, this assumes that all sectors of society – and not just in the USA - are capable of acting rationally in regard to lifestyle behaviours such as diet, exercise, tobacco and alcohol consumption, and so on.

Our widespread inability/unwillingness to do so will continue to impact on the incidence, and consequent impact, of cancers as well as a range of other serious illnesses, much to the detriment of individuals and the health system at large.

To over-simplify, there is a strong case for urging, “Citizen, health thyself,” and for government to support this endeavour where appropriate.