Treasurer Joe Hockey and his band of Treasury officials have emerged from their crystal ball gazing to predict the shape of Australia circa 2055. The results, like much futurology, are a mix of data analysis, inspired guesswork and optimism.

Or if you prefer, the bleeding obvious (we will live much longer), the concerning (fewer people of traditional working age), and the how-could-you-possibly-know? (economic predictions tend to assume a consistency that changes in governments or global circumstances cannot guarantee).

One critic of the economic projections said the only sure thing about the economy in 40 years’ time is that there will be an economy.

The 2015 Intergenerational Report (IGR) does, however, contain a caveat – “Long-term economic projections present one possible outcome based on a set of well-informed projections and assumptions about future changes in Australia’s population, workforce participation and productivity.”

As a result of a partnership with the North Coast Allied Health Association, NCML offers short courses which take about an hour to complete and are worth one CPD (Continuing Professional Development) point per hour.  With NCML’s enrolment key, users will have free and unlimited access to:

Co-payment taken ‘off the table’

Whether it’s called a GP co-payment, a value or price signal, or something else, one thing is sure about the $5.00 that was to be added to every consultation fee: the proposal is, to use one of the Prime Minster’s better-known phrases, dead, buried and cremated.

Not that words as definitive were used by Health Minister Sussan Ley, who, at the end of her media release on the topic (3/3/15), said, “It is clear the proposal for an optional $5 co-payment does not have broad support. The measure, including the proposed $5 reduction to the Medicare rebate, will therefore no longer proceed and has been taken off the table.”

The search continues to find another way to reduce the medical aspect of budgetary debt, this time one that has support from medical professionals, the public and enough Senators to pass into law.

From Alstonville to the Himalayas 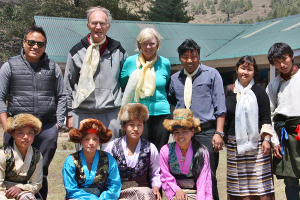 John and Helen Niven recount the incredible story of taking dental care to the remote villagers of Nepal.

Our dental volunteer trips to Nepal were initiated by my meeting Ang Tshering Sherpa in May 2011 whilst on a trip through Tibet with World Expeditions. He was the chairman of the committee that ran the Kushudebu Public Health Mission Nepal at Junbesi, a remote village on the original route to Mount Everest.

While the clinic was able to cover many medical problems the nearest dental service was five hours walk away. After many conversations and emails with Ang I decided to come to KPHMN and attempt to set up a basic dental facility.

In April 2012 Helen and I arrived in Kathmandu with many kilograms of portable dental equipment and supplies. We were met by Ang’s brother Ang Nigma who was our guide for our visit to Nepal. A visit to a local dental supply house to collect further supplies, followed by an interview with the Nepal Medical Board to obtain my dental registration, saw us ready to set out to Junbesi.

I had managed to put together a simple transportable dental surgery, consisting of a portable dental unit, a suction unit I found in Kathmandu, and a suitable quantity of instruments and supplies provided by generous dentists and dental supply houses in Australia.

Read more: From Alstonville to the Himalayas

As the saying goes, a week is a long time in politics, while three months is an eternity. Since the last edition of GPSpeak the Coalition's second proposal for changes to GP Medicare funding has come and gone. We also have a new Minister for Health, Sussan Ley, whom we wish well in this challenging portfolio.

The proposal to increase the minimum length for a standard consultation from 5 to 10 minutes took the profession by surprise. While the average "Level B" GP consultation is 14 minutes, 25 per cent are less than 10 minutes. The government’s aim was to eliminate so-called "6-minute medicine" but the proposal contained several potentially adverse effects for general practice.